"Seventeen-year-old Cameron Porter is interviewed by the president of the County Board of Education, a county psychologist, an FBI Threat Assessment analyst, a Threat Assessment specialist, and the county sheriff as to his involvement in a shooting in which a student was killed and others were injured. Cameron, a shy, intelligent African American young man, was with the sniper, Len, an angry, slightly built Anglo teen. The book is comprised of Cameron’s interview transcripts and Len’s handwritten journal entries leading up to the shooting. Cameron and Len clearly have different ways of responding to the bullying at school and to stress at home. Cameron’s wealthy, career-driven father has high expectations and pushes Cameron to become more aggressive. Len’s abusive father takes out his problems at work on his family. In response, Cameron becomes even quieter, and Len gets even angrier. Len fights back, taking Cameron along for the ride, starting out by defacing a church and target practicing in the woods. Then he lures Cameron and their friend, Carla, to the high school with paint cans in hand. But they soon discover that Len is armed with guns rather than brushes. This isn’t going to be a graffiti spree; it’s going to be a shooting spree."

Reader reviews of Shooter from Goodreads: 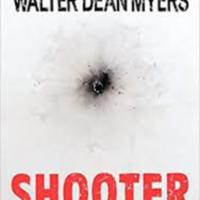